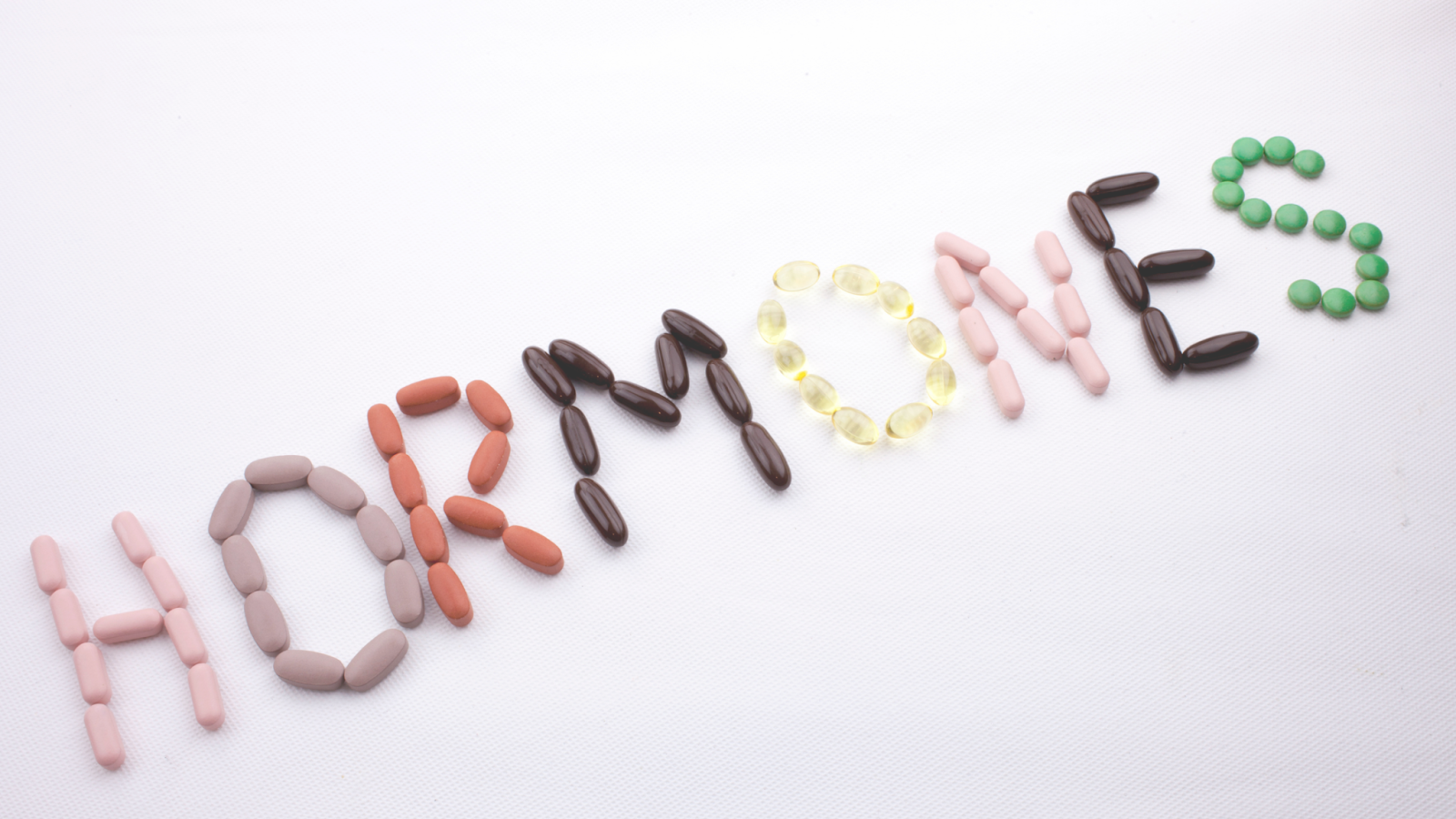 Phthalate, parabens… They are part of our daily life, but what are they?

From the bathroom, to the kitchen and even through packaging … Some are endocrine disruptors.

As their name suggests, they disrupt certain functions of our endocrine system.

How do they work? Are they dangerous? How can we protect ourselves from them?

I hope to bring you some answers in this new article.

what are endocrine disruptors?

The endocrine system and its hormones

Hormones are natural substances that act as “chemical messengers” between different parts of the body. They are transported through the blood (and lymphatic vessels) and bind to specific receptors on target cells, triggering their biological effects.

How do endocrine disruptors work?

According to the World Health Organization (WHO)/

“an endocrine disruptor is a chemical substance of natural or synthetic origin, foreign to the organism and likely to interfere with the functioning of the endocrine system, thus inducing harmful effects on this organism or its descendants.”

They are therefore substances that can alter the functioning of organisms (human or animal), often with effects that can be observed after decades, or even over the following generations.

Endocrine disruptors can affect the hormonal system in different ways:

– by mimicry, by imitating the action of a natural hormone and substituting for it in the biological mechanisms they control

– by blocking, by preventing a hormone from attaching to its receptor and thus hindering the transmission of the hormonal signal.

– by modifying the natural production of our natural hormones and by interfering with their mechanisms of synthesis, transport or excretion.

Doctor Elia’s opinion: “These hormones look like natural hormones but are not. They can therefore sometimes lure the hormonal receptors which then accept the “false hormones” as a natural hormone with the dangerous consequence of disrupting the functioning of the cells: once the “Trojan horse” has entered the place, numerous serious problems can occur.

Air, water, food, plastics, cleaning products, cosmetics… there are many sources of exposure to endocrine disruptors!

There are two main types :

The potential for adverse effects from exposure to these natural or synthetic substances depends on various criteria, such as the level of exposure of the organisms (the dose), the duration of exposure and the periods of life during which the exposure occurs.

Indeed, there are times in life when the body may be more sensitive to the effects of endocrine disruptors, such as during pregnancy, infancy, adolescence or when the immune system is weakened.

Scientific studies on the subject

The role of endocrine disruptors was suspected in the early 1960s in the USA and mentioned in 1961 by various international scientists who agreed that phenomena affecting the reproduction and health of wildlife and humans were linked to endocrine disruption. This hypothesis will be at the origin of numerous studies and international meetings which will progressively make this environmental and public health issue emerge.

Scientific publications on this phenomenon increased in the 1990s and are currently experiencing a strong acceleration with the multiplication of projects initiated by agencies dedicated to the study of these substances.

The framework of the National Research Program on Endocrine Disruptors (PNRPE), by the transversal and multidisciplinary character of the issues it addresses, aims to bring together actors from different disciplines (fundamental biology, medicine, (eco)toxicology, epidemiology, human and social sciences, etc.) and to contribute to the development of a community of researchers on the subject of endocrine disruption.  Since the beginning of the PNRPE, 39 research projects have been funded: 7 in 2005, 15 in 2008, 9 in 2010 and 8 in 2013. This program has resulted in dozens of scientific publications and has provided important new knowledge.

A national strategy on endocrine disruptors 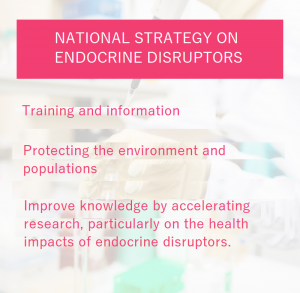 Since 2014, a national strategy has been launched in France and aims to articulate research, monitoring and regulation to prevent and limit the exposure of the population to these substances. This strategy has four main axes: informing citizens, supporting research, programming expertise, and implementing specific regulations.

A second national strategy  was developed in February 2021. It is structured around three priority issues:

– to protect the environment and the population,

– improving knowledge by accelerating research, particularly on the impact of endocrine disruptors on health.

The competent authorities of Denmark, with the collaboration of those of Sweden, the Netherlands, France and Belgium launched a website, in June 2020, providing lists of endocrine disruptors for humans and/or the environment: edlists.org

In France, the ANSES (Agence Nationale de Sécurité Sanitaire), as part of the second strategy on endocrine disruptors, has the task of drawing up two lists of substances linked to endocrine disruption.

The objectives of these different approaches set up at the French, European and international levels are :

Today, after many years of research, one of the major challenges remains their identification. It remains difficult to extrapolate from laboratory data to effects on an individual, his descendants, or the population. Many substances can bind to hormone receptors, or even disrupt the endocrine system, without altering it in the long term or in a harmful way.

Many publications identify a probability of binding with a receptor, without succeeding in knowing what the consequences of such binding would be in the organism.

How to limit exposure to endocrine disruptors!

By strictly controlling the uses of products identified as likely to harm our health, regulations on the prevention of chemical risks constitute the first protection available to consumers.

Also beware of the cocktail effect!

The toxicity of a mixture of molecules can be different from the sum of the toxicities of the molecules that make it up. For example, it is well known that some drugs interact with each other. Their joint use can then lead to the appearance of undesirable effects.

Studies are being conducted to evaluate the effects of the combination of different endocrine disruptors. However, it is impossible to test all combinations of substances and concentrations. 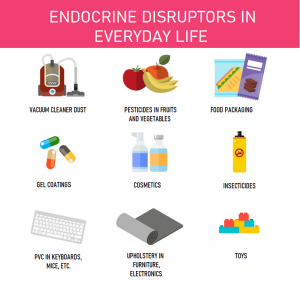 It is possible to act at a personal level to limit the invasion of Endocrine Disruptors in our daily lives.

-Air your home at least 10 minutes a day

-Wash new clothes before wearing them

-Limit your consumption of canned soda and canned goods

– Be sure to limit those that contain phthalates, triclosan and parabens.

– Respect the conditions of use of the products

– Choose products from the European Union, which has the strictest regulations in the world

– And don’t forget that “natural” does not mean healthy and safe!

Many causes, often multiple, can influence the risk of cancer and recurrence. If it is difficult to act on certain risk factors (gender, genetic heritage…), it is possible to protect oneself against certain environmental risks.

Because your well-being and safety are my priority, Ozalys laboratory research focuses on the endocrine system. We are therefore careful not to introduce into our formulas any chemical or natural ingredients suspected of behaving like hormones, the famous endocrine disruptors likely to thwart or mimic the functioning of our hormonal system.

We track down phthalates, plasticizers and heavy metals even in our packaging and use packaging that protects the formulas and avoids the migration between the container and the content so that you can use our range of products in complete safety and serenity.

The Ozalys laboratory is innovative and is committed, because life is precious.

Because you are precious. 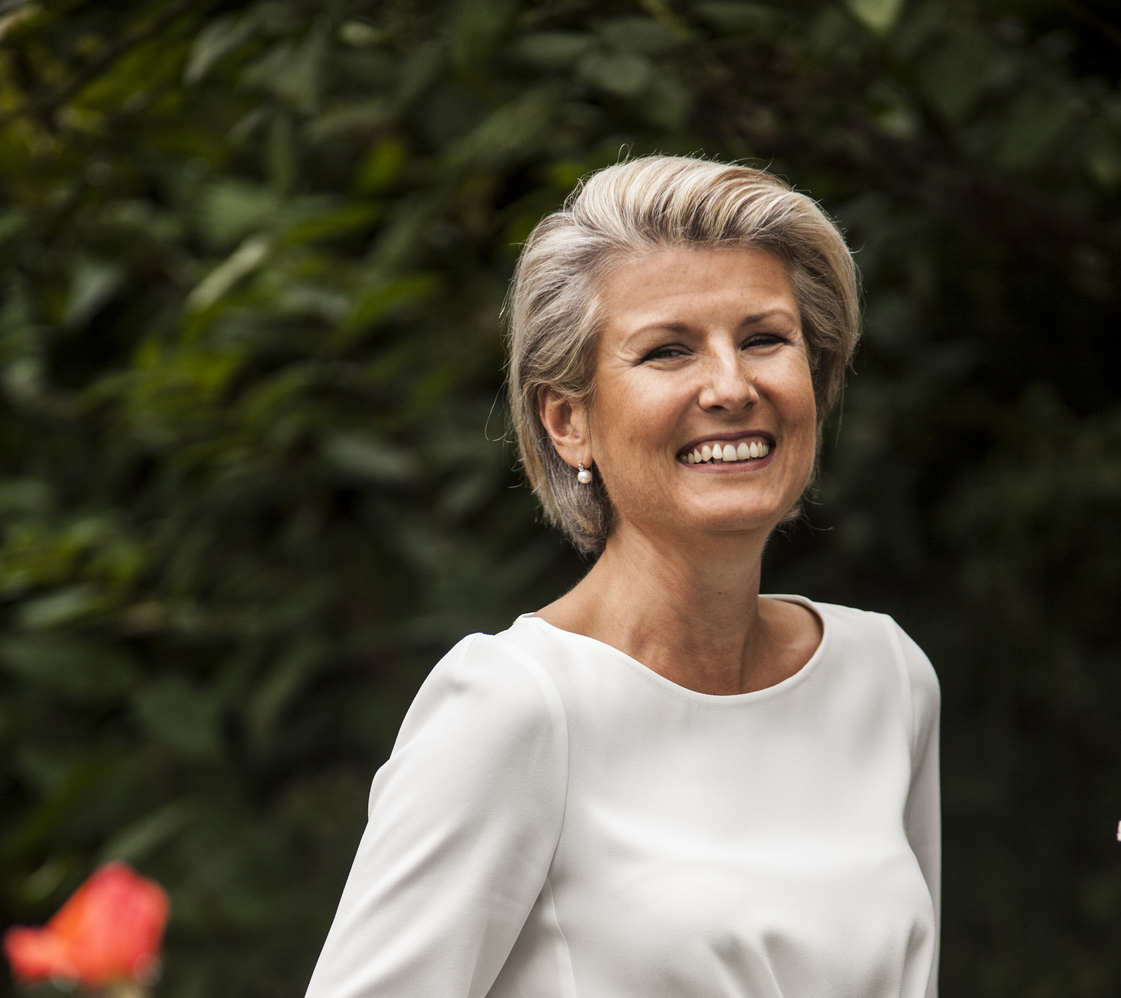